We might not have a Batmobile, or a flamboyant team of superheroes with extraordinary powers to boot, this comic book by Paolo Fabregas, “The Filipino Heroes League – Book 1: Sticks and Stones” might fill in the empty space of that very specific discussion.

The Filipino Heroes League Book One: Sticks and Stones

The story started with a short introduction about a Filipino hero, Bomb Boy, turning into an American citizen due to his partnership with another character hero, the long-time crime-fighting partner, The Great American. Because of this movement, Bomb Boy gained a lot of “air time” on television and was assigned to more assignments.

In contrary, the remaining Filipino heroes, like Kidlat (Lightning) Kid, were so agitated because of this; saving thousands of people from a huge fire caused by the bombing, however, they were not mentioned. He was so angry (or probably, jealous) he forgot that their main mission is “to help the Filipino people no matter what the cost.”

What’s so funny about the first part of the comic… it’s so happening. The introduction is already something that a reader (especially in my case) can relate because it is true.

There are many characters in the story that I like, and one of them is Invisiboy (the team calls him “Vis”). They call him fat, but he always remarks just being “big boned”. He is so like me. You can also meet other superheroes, another group called “Republic Heroes”. These superheroes are more likely the Filipino version of the “The Justice League of America”. But I won’t talk about them in details because I want to also let you read the comic book.

The characters are likable because they are funny and very Pinoy (one of the heroes loves ensaymada as a snack). There are romantic twists in the story, which we love so much, and the all these things made me laugh on every couple turns of the page.

What makes The Filipino Heroes League (FHL) unique and unusual is the fact that no one from the team can fly. They don’t even have superpowers. To give you a general hint, Kidlat Kid travels using his pedicab or commonly called trisikad.

The very obvious storyline of this comic books includes corruption, dirty politics, drugs, and other crimes. They are all true and relevant to our times but exaggeratedly told because… superheroes.

I like that idea of the author that the villains are low profile as well. What I mean is, the FHL doesn’t need to fight demons and aliens. It’s very simple, yet enjoyable to read.

Some parts that I don’t catch up about this book

It is not I don’t like some parts of the story, but there’s profanity–uncensored–which is not suitable for children under the age of 18. The book is set for a young adult to mature audience, so it is just fitting to not let your kids read this comic book.

I am not sure if non-Filipino readers can relate to this because they might have the thoughts and a stronger appeal of the American version. They might think it’s a copycat. However, I might be wrong with this. But for Filipino readers, perhaps the story is very relatable and very true like it’s our own life story.

About the physical book, I haven’t seen a copy or two in a local bookshop considering it was first published years ago. Luckily, though, I was able to secure a copy from the online store, Lazada Philippines. It’s very difficult to find (but thanks to online shopping I have my own copy), and the items are limited.

I have finished the comic book in one sitting. It’s funny, it’s true, and from what I have mentioned earlier, very relatable.

The author, Paolo Fabregas, was able to hit me on the first part of the book. He was very successful in telling the story that is very relevant to our current times. And the second book, “The Filipino Heroes League – Book Two: The Sword” is already out. I am very excited to read it very soon and can probably be one of the books I am going to review on this blog.

ALSO READ: Moleskine And My Other Favorite Things 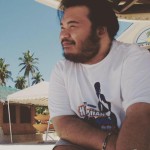 8 Classics Books To Read To Your Children

5 Books To Stir Hope And Inspiration This New Year

Coronavirus Has Resulted In Shortage of Hand Sanitizers. So What Now?